Take in the breathtaking sweep of trains on bridges, trestles, and viaducts around the world. This premium 10-image 4k set is free for Windows 10 Themes. These images are to be used as desktop wallpaper only. 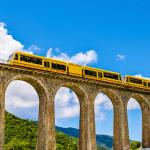